The Artsy Mobile team is pretty aggressive in our stance on Open Source by Default. We’ve talked about it at conferences around the world, in renowned magazines and on our blog.

It’s worth mentioning that we don’t just talk externally about Open Source. Internally, the Mobile team runs talks about Open Source for the rest of the Artsy staff. As well, we discuss the tooling and business implications of having our work in public repos. Artsy strives for an open culture, in this case the development team, on the whole, is just further along in the process.

The Open Source app idea started with an experiment in the Summer of 2014, asking, “What does a truly Open Source App look like?” The outcome of that was our Swift Kiosk app, Eidolon. Open from day one. We took the knowledge from that and applied it to our public facing app, Eigen. Open from day 806. That made 2/3rds of our apps Open Source.

Energy is commonly known as Artsy Folio. It’s a tool for Artsy’s Partners to showcase their artworks on the go, and quickly email them. Here’s a beautiful splash showing it in action. 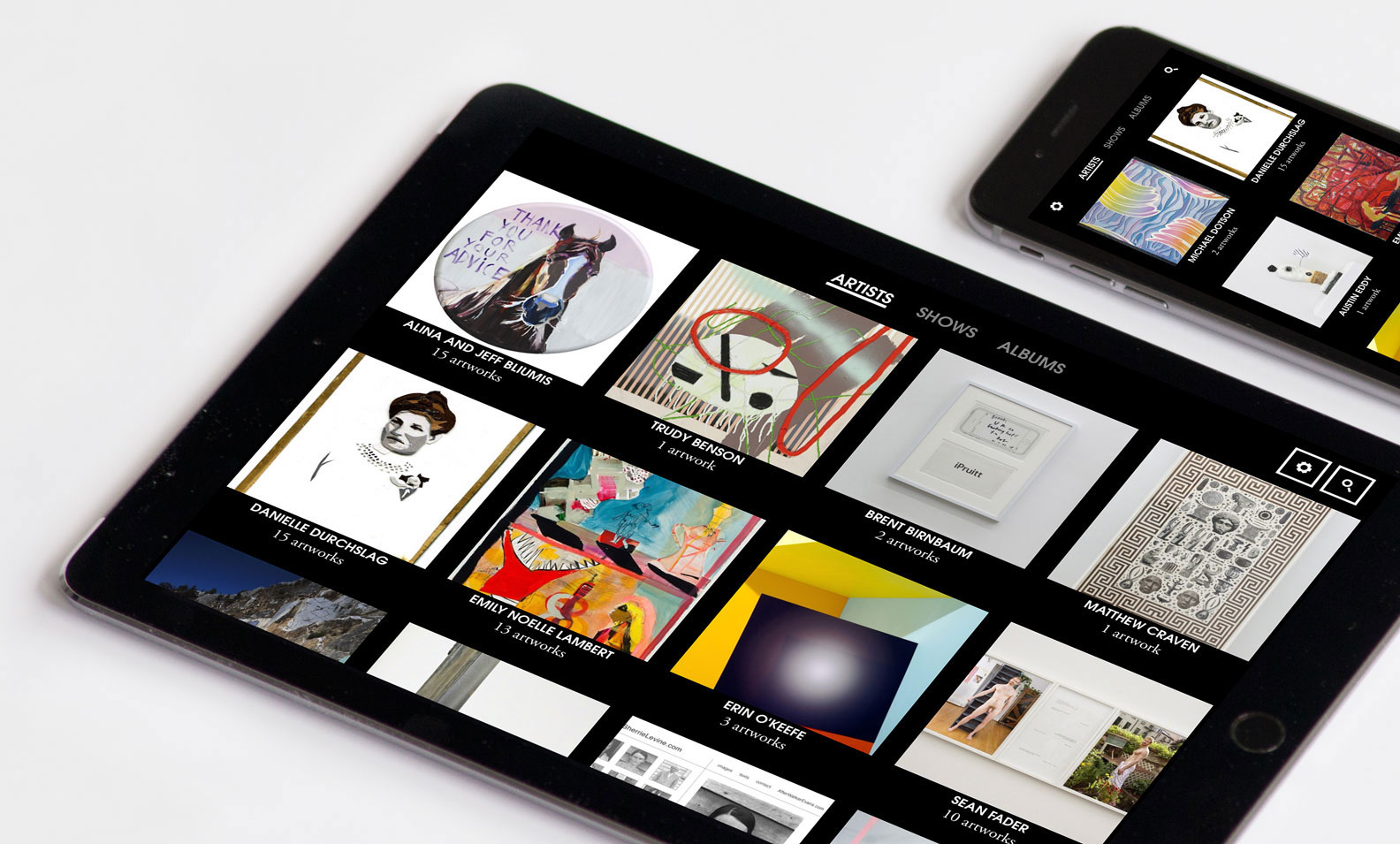 This app comes from the pre-CocoaPods, pre-ARC, pre-UICollectionView and pre-Auto Layout days. It spent 3 years with no tests, but has come up to over 50% code coverage in the last year. It’s testing suite is super fast, given that we learned a lot with Eigen’s tests we stuck with five main principals:

Folio is interesting in that it has competitors. To some extent the Kiosk app does too, but the cost of entry there is really high in comparison. Folio on the other hand, has a handful of competing businesses who exist to only build a Gallery/Museum/Collector portfolio app. In opening the code for Folio, we’re not making it easy for people to copy and paste our business, it’s very directly tied to Artsy’s APIs and CMS.

I commonly get questions about the process of Open Sourcing an app, so here’s what happened after I decided it was time. First, I emailed my intent: 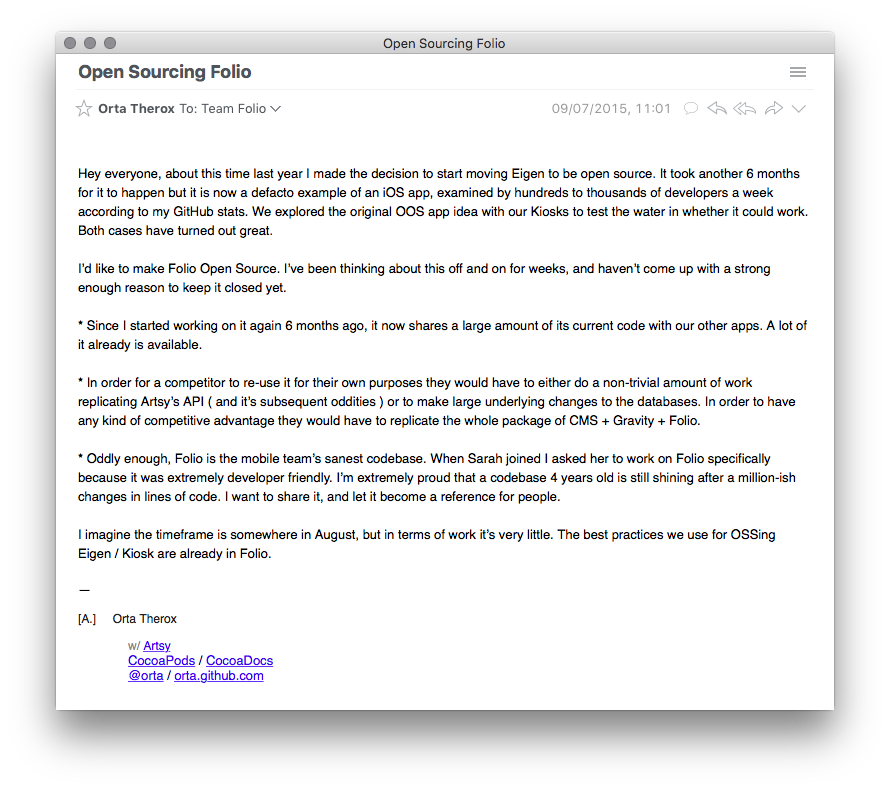 The concepts I wanted to cover were: “This is a codebase is worthy of art”, “We know what we’re doing”, “This doesn’t make it simple for someone to create a business off our product” and “I’ve managed to get a lot of the source out already.” I gave a month or so to ensure that I could have corridor chats with people, in order to be very certain around opinions. We had some discussions in the email thread about ways in which an open source’d Energy would impact the team, and overall the reaction was positive. This wasn’t surprising, the non-technical parts of the team are regularly kept up to date on thoughts like this.

After the internal announcement I started looking at the codebase, what should be cleaned up. I don’t believe a codebase is ever perfect ( just look at Eigen’s HACKS.md ) but one thing I learned from the launch of Eigen is that we need a lot of beginner docs to help people get started. So I went into Energy’s docs directory and started comparing it to Eigen’s.

With the docs ready, we anticipated the repo change as we did with Eigen. This means making sure all loose pull requests were wrapped up. All code comments were audited. Then we used github-issue-mover to migrate important issues to the new repo. Then we deleted the .git folder in the app, and git init to create a new repo.

Given that we have three Open source apps now, I wanted to give them a consistent branding when we talk about the apps from the context of the codebase. It’s like programming, if you’re writing a similar thing 3 times, definitely time to refactor. 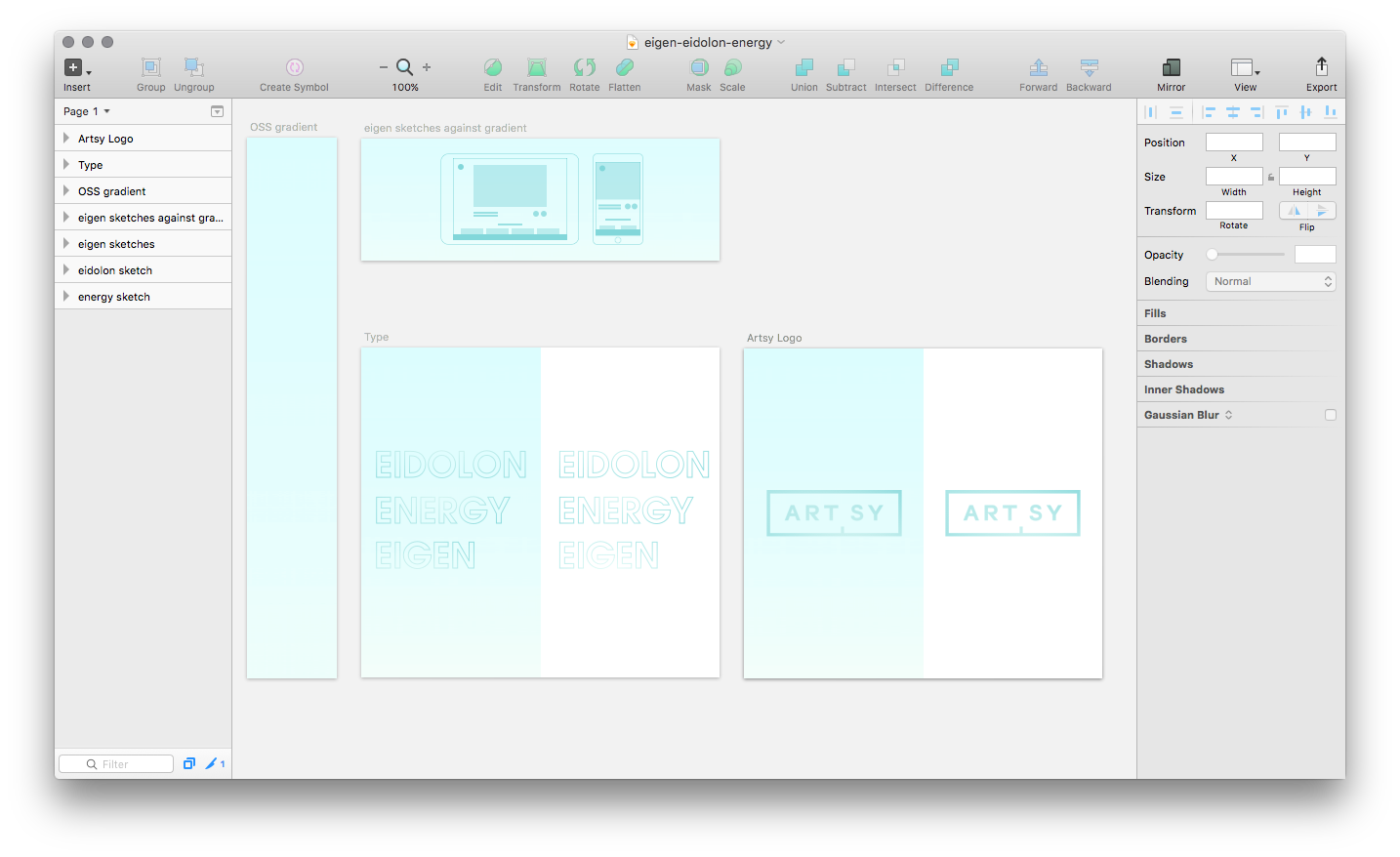 Finally, I started working on the announcement blog post. Which you’re reading. I’ll send a pull request for this blog post, then when it’s merged. I’ll make one more final look over how everything looks, then make the new Energy repo public.

On more than just Opening Source

Eigen, the public facing iOS app, allows people to log in with a trial user account. We also have a known API Key + Secret for the OSS app. With this, any developer can run a few commands and have a working application to play around in. This makes it easy to look around and see how things are done.

Energy, however, requires you have a Artsy partner account. So opening it up would mean that an OSS developer hits the login screen and is stuck. In developing this app, I’ve slowly been creating my own partner gallery account based on my paintings and photography. So now when you set up the app to be ran as an OSS app, it will pre-load a known database of artworks and metadata from my test gallery. 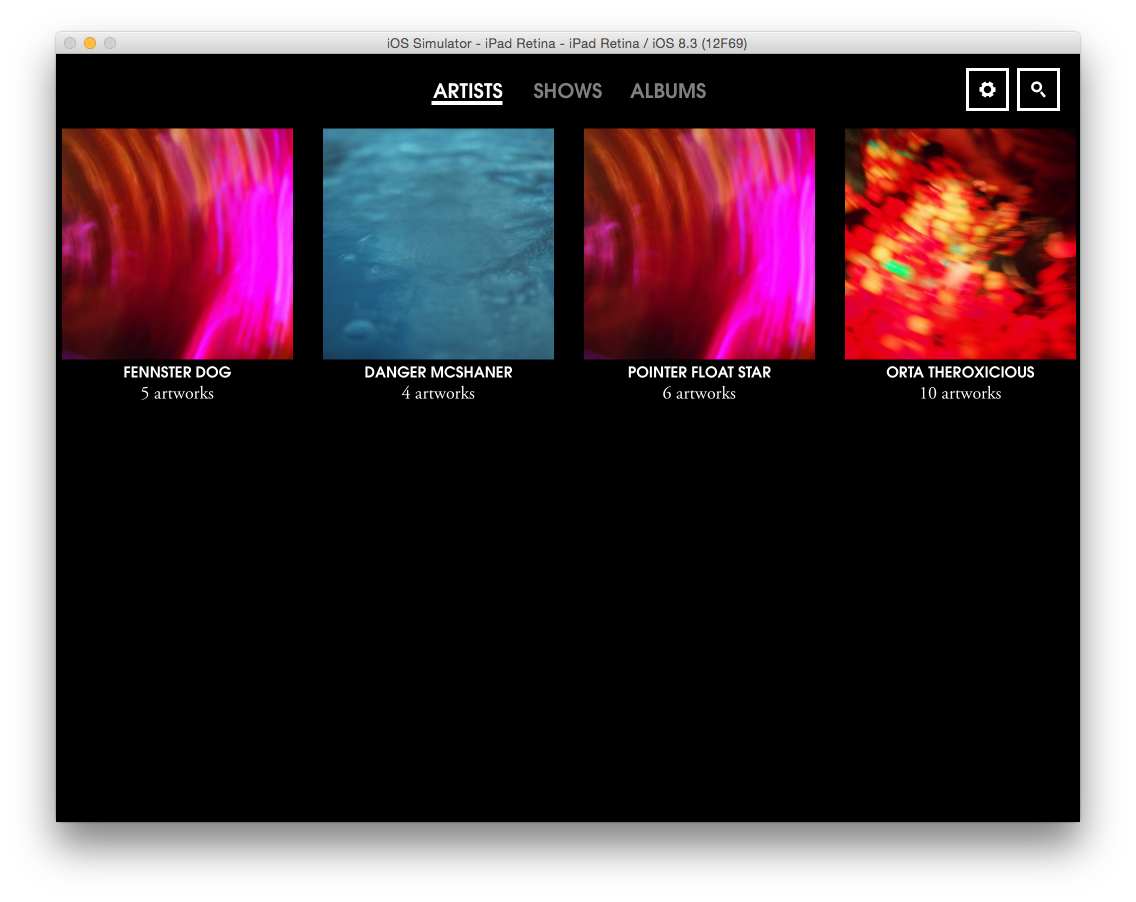 Its easy to imagine that Open Sourcing something is an end-point, but from our perspective it is a journey. We want to make sure that anyone can download this app, learn how and why it’s structured and then run through the app with a debugger to get a deeper sense of how everything connects. Just releasing the code would have been underwhelming. Instead we’re aiming high.

I think that there is no higher compliment to your team and your code than opening it to the public.

You should Open Source your app.

Part of a series: Open Sourcing Your App