When the odds are stacked against you, your mind is overflowing, and you are ready to just pop, there’s always practical debugging tips to help you through a cloudy day.

In this post I’ll take you through a debugging session where I reproduce a crash, for which we were receiving a bunch of crash reports, but I was unable to reproduce by just using the application.

It will cover the following topics:

This crash report was shortened for clarity sake, you can find the full report here.

Now, this might not be the toughest nut to crack –if you’ve been doing UIKit development for a while, you may already know that UIScrollView does not weakify it’s delegate– but instead of just going by experience and making some changes, let’s see if we can’t figure out exactly what’s happening, for the sake of reproducing and confidently making the right fix.

The lines near the top of the stack trace tell me that it’s probably a message being sent to some garbage memory, i.e. a released object, so that’s where I want to be poking around.

Getting at often called locations

In this case that starts off with a breakpoint in our code:

And finally I repeat the process and set the breakpoint that I really want to get to:

By this point, I’m left with the realization that I don’t have a device running iOS 8.1.x anymore –the above was all on the simulator– and thus jumping through the code in a debugger on a device is not going to be reliable. Instead, I’m going to take a look at the disassembly and (pseudo) decompiled code in Hopper –a tool I highly suggest you go and buy right now, it’s ridiculously cheap for the amount of time it will save you–.

To be able to do so, though, I first had to get a copy of UIKit for one of the devices of which we received crash logs.

With that out of the way, I can finally load that up in Hopper and look at the instruction. I can get the offset of the instruction from the stack frame, specifically the ‘66’ in -[UIScrollView _getDelegateZoomView] + 66. This means that the instruction’s address is that of the function it is located in plus 66, which, as you can see in the below screenshot, is halfway through the objc_msgSend call: 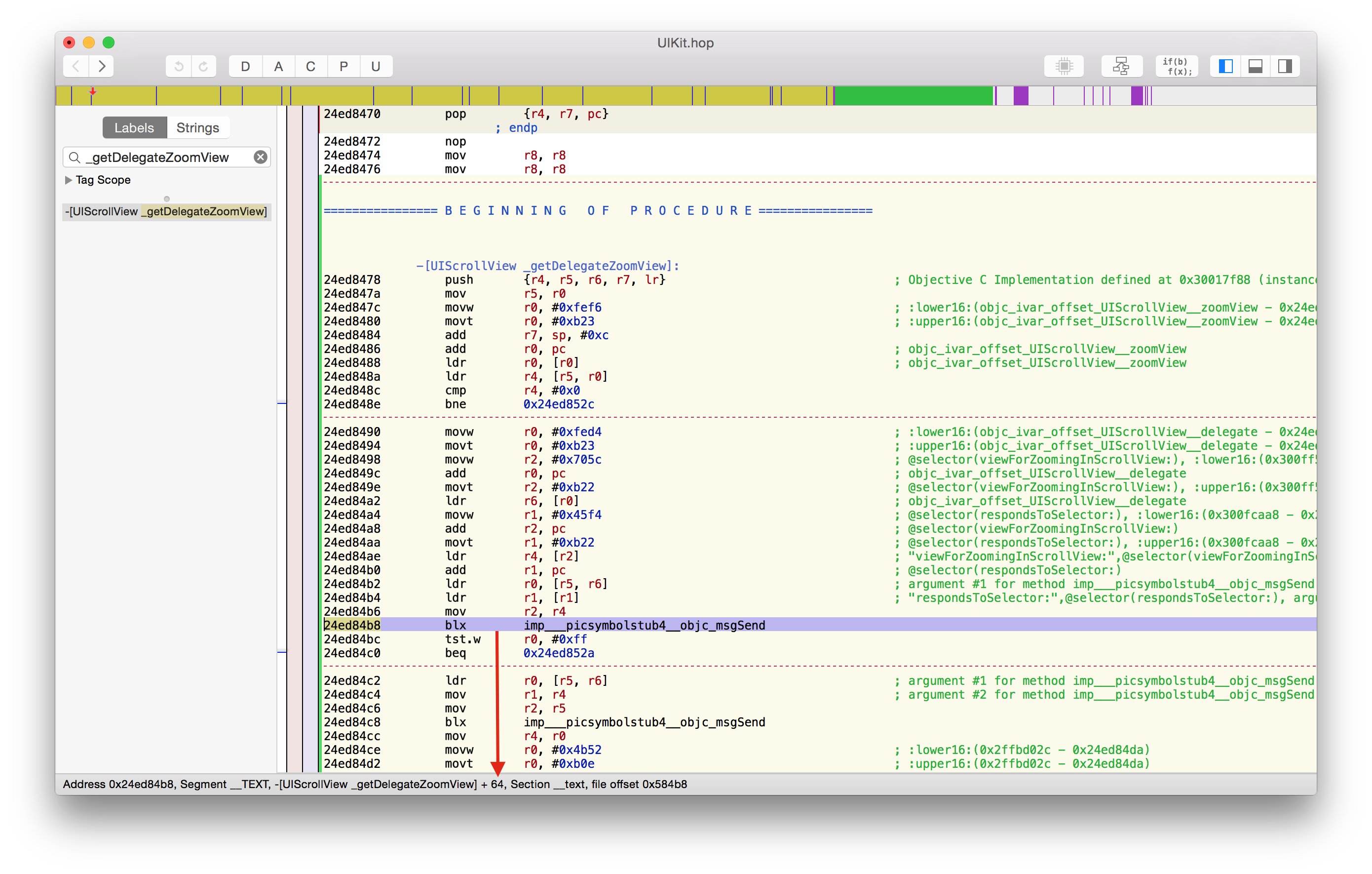 If you want to get into the details of what these instructions are doing, I suggest you read up on a blog post such as this article by Mike Ash. The important part here is that you can easily see that it’s all related to sending the following message to the scroll view’s delegate:

Hopper can give us (pseudo) decompiled code for this method, which looks like the following: 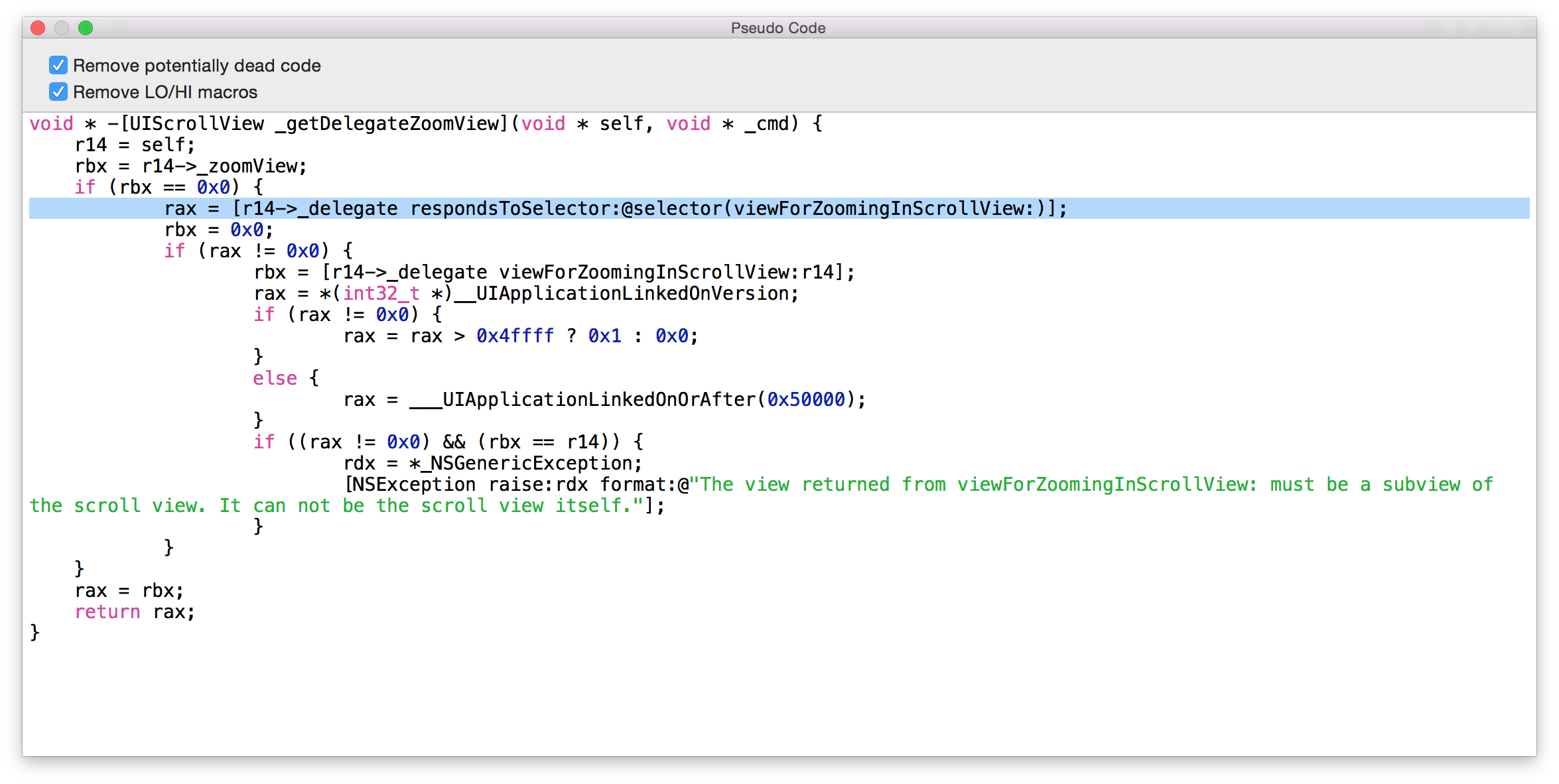 Based on that, it’s clear to see that that’s what happens and so it’s the delegate that points to garbage, 0x10 in this crash report to be specific.

Now that I know what’s happening, it’s time to simulate the crash on the Simulator so that I can confidently make the fix for what I think is going wrong.

Based on the above, I now know that, on the Simulator, this crash would occur around the 16th instruction, which is where the -respondsToSelector: message gets sent, so I’ll jump to just before it, but after where the delegate variable would get set:

At this instruction, the object to which the message will be sent has been assigned to the $rdi register, which in my case is still the expected and valid object:

At this point I can just override the register with the garbage shown in the crash report:

And finally continue execution and let the crashing occur:

Perfect, an exact replica of the crash report, so now I know with confidence that the problem is that the ARArtworkViewController is released by the time that method is called.

The fix for this crash is simple and not really interesting for this post, as it’s all about the steps I took to arrive there. I think these are way more interesting, as you can apply some/all of these in many different situations.

But for completeness sake, the fix is to make sure that the scroll view’s delegate gets nillified before the view controller is released and in addition it lead to me figuring out why the scroll view was still even alive at that time, which was a block retention-cycle.