I was really excited about CircleCI 2.0, especially the workflows features. It seemed to me that with the work they had done here, really complicated builds would be able to be configured in a way that made more sense than on 1.0. This was something that was causing me grief on one of our projects so I upgraded to 2.0. It was pretty hard to get green and once we did, we decided to downgrade back to 1.0. Here's why.

Volt is the internal name for the app that our Partners use to enter information about their artworks and artists into the Artsy platform. It's a Rails app and has a pretty big and slow test suite. Over time, we've ended up with a good number of things that run during CI for this project:

Some of these things are fast and some are slow. Ok, fine, really only the view specs are slow - running them in isolation takes around 20 minutes on my laptop.

My goal was to separate out the fast stuff, run that in parallel and only if all that passed would I run the view specs. This should get feedback to developers faster when they've broken something and not waste time running the slowest part of the CI stack.

Artsy has 7 containers with CircleCI and Volt takes up 6 of them, so being able to break apart a run into pieces seemed like a good thing for the wider Artsy engineering organization too - developers working on something else would spend less time blocked by Volt runs and developers working on Volt shouldn't notice anything. Foreshadowing!!

Here's the CircleCI 2.0 config I ended up with and here's a pretty picture of what our CircleCI 2.0 builds looked like: 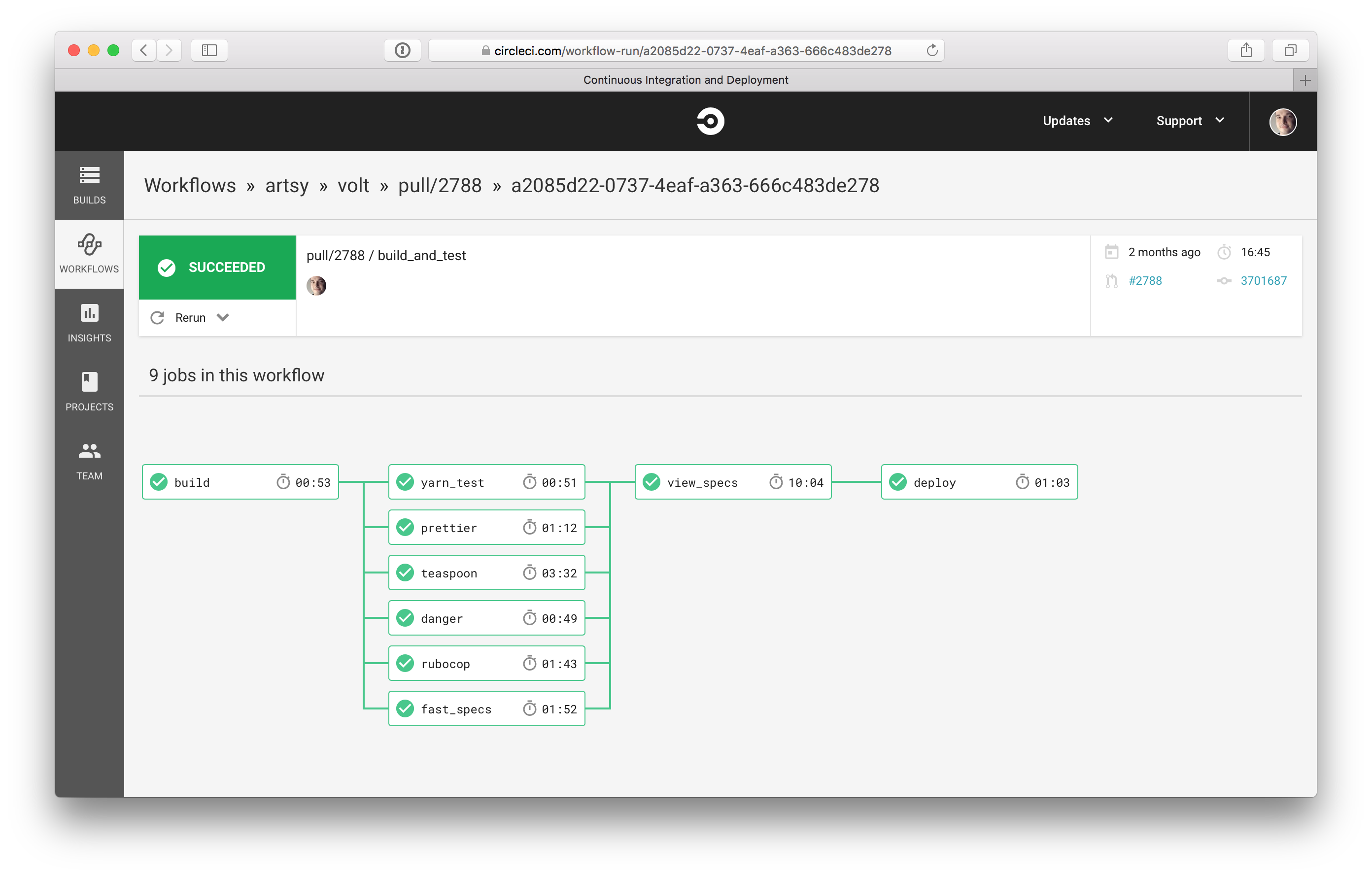 I'm really proud of this - it's cool and it was hard to figure out!

But then we lived with it and noticed something that really slowed us down. Each rounded rect in that picture is called a job and is scheduled along with anything else you have going on at CircleCI. Let's talk about parallelism for a moment. Take that second column - those jobs all run in parallel, but you can also set any of your jobs to have also be parallelised. For instance, that fast_spec job was set to a parallelism of 6. That means in order to run all of the jobs in column two, we'd have to have a total of 11 containers!

While tinkering with this, I used all sorts of values for the parallelism of the fast_specs job, even trying no parallelism.

It didn't seem to matter - having these jobs in a queue along with whatever other projects consume the Artsy containers meant that once the build step was done and the next column of jobs kicked off, only some of the jobs would be able to run and we'd be stuck waiting for more containers. But those are fast jobs, so they would finish pretty quickly. But then again, moving on to the view_specs job would be slow because it also wanted 6 containers to run in ~10 minutes.

What this meant was that all told it often took 45 minutes of wall time to finish one of these builds even though as CircleCI reports it, they only took like 15 minutes.

We reached out to CircleCI to explain as best we could our situation but didn't get a lot of help there. They advised that going back to 1.0 might be wise for now. This is fine - we can't expect all of CircleCI's features are going to be perfect for us and our particular projects.

For now, we're back to CircleCI 1.0 and have tried to achieve a similar setup, but without the glamorous workflow functionality and cool diagram. I'm looking forward to seeing how CircleCI evolves their workflow feature and hope that it may end up in a place that can work for this project.