We now have over 4700 RSpec examples in one of our projects. They are stable, using the techniques described in an earlier post and organized in suites. But they now take almost 3 hours to run, which is clearly unacceptable.

To solve this, we have parallelized parts of the process with existing tools, and can turn a build around in just under an hour. This post will dive into our Jenkins build flow setup.

To keep things simple, we’re going to only build the master branch. When a change is committed on master we’re going to push master to a master-ci branch and trigger a distributed build on master-ci. Once all the parts have finished, we’ll complete the build by pushing master-ci to master-succeeded and notify the dev team of success or failure.

Here’s a diagram of what’s going on. 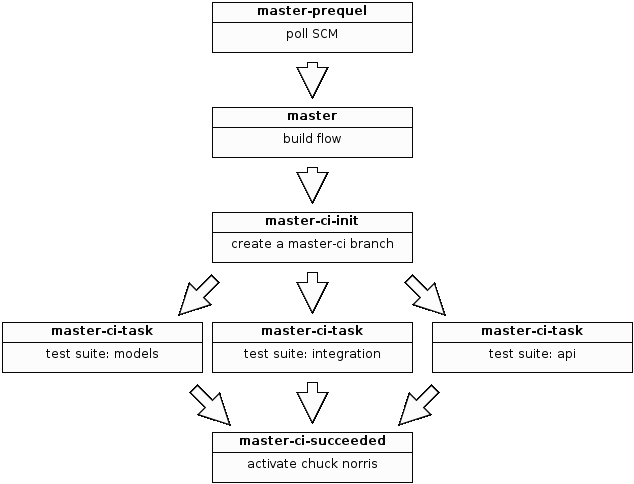 A free-style job that connects to the SCM, in our case Git.

This is a build-flow job. We’ll describe the individual tasks that the flow invokes further. The flow DSL looks as follows.

This is a good place to add an e-mail notification post-build action for every unstable build.

A free-style job that creates the master-ci branch from master. It needs to be connected to your SCM and executes the following shell script.

Note that we cannot combine this task with master-prequel, because we have to make sure the branch creation runs once under the entire flow, while master-prequel can be run multiple times, once per check-in. Otherwise the master-ci branch could get updated before a master-ci-task runs from a previous flow execution.

A parameterized build that accepts a tasks parameter that the flow will pass in.

Change the default branch specifier to master-ci and execute the following shell script.

This example runs rake $tasks, which we define to be various test suites in our flow DSL. Our test suite setup is described in this post. Your mileage may vary.

This is an optional step. We use this free-style job to tag master-ci as master-succeeded with the following shell script.

Our deployment to production will pickup the master-succeeded branch when it’s time.

I see a few possible improvements here that might require a bit of work.

Please suggest further improvements in the comments below!

(Update: See Splitting up a large test suite for a modified approach that splits work approximately evenly among an arbitrary number of sub-jobs.)