Before I joined Artsy, I worked at companies where software projects tended to have meaningful, predictable names. If we were building a system for flagging media uploads, it might be called media-review. In many cases, our code repositories' names matched the main product's branding or even the company's name. Life was simple and there was no risk of ambiguity.

At Artsy, our systems have peculiar code names like Gravity, Pulse, and Vortex. There's a persistent learning curve as you contribute to different repositories or as new services get created. Numerous times, I've wondered: are code names worth the trouble? 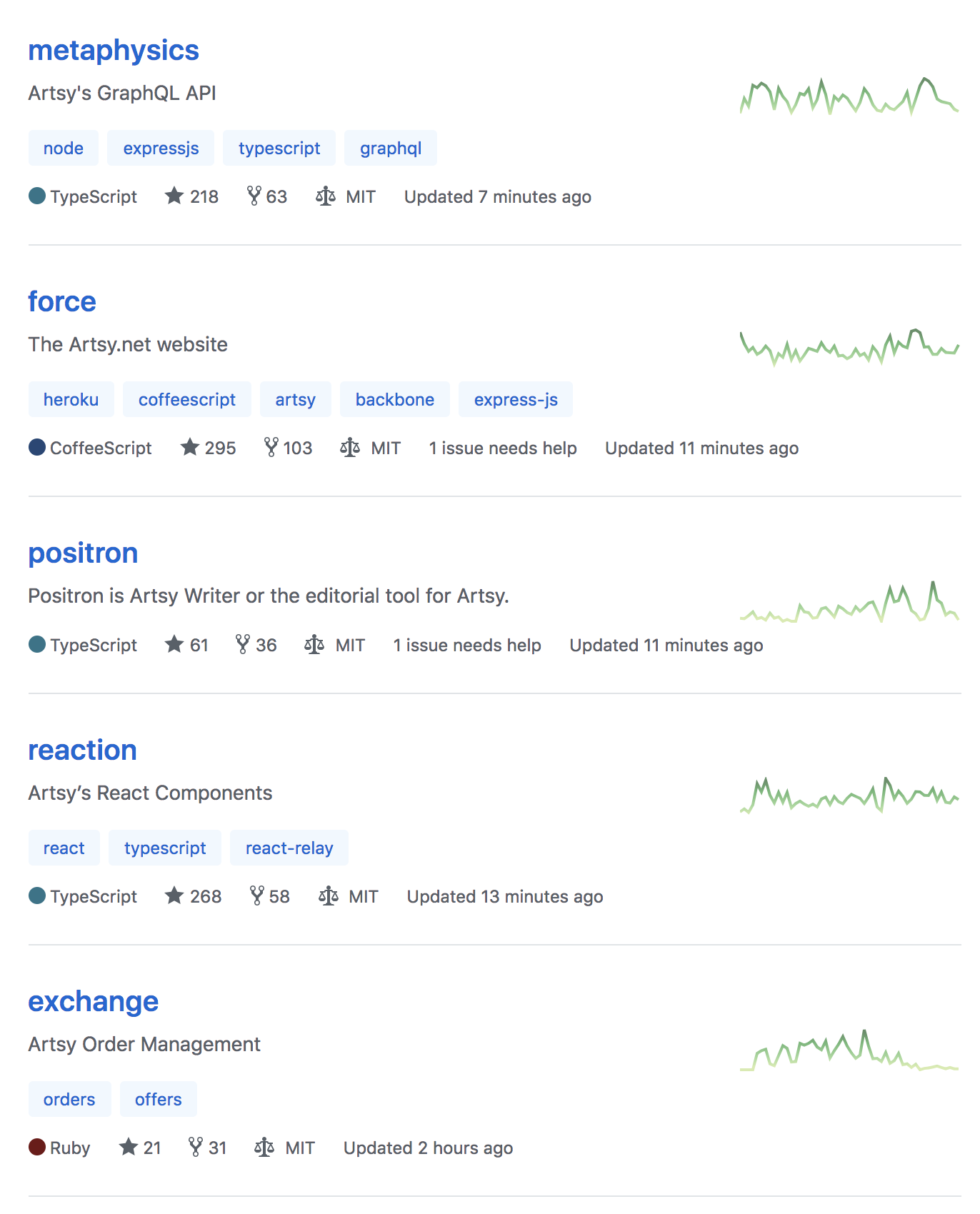 To be clear, any project naming scheme works in small quantities. Personal projects or libraries for public release should probably just be named for clarity and find-ability. Code names start to offer benefits as a team grows and a product evolves over the longer term:

Code names embrace that we don't necessarily know the fit or scope of a system when it's first conceived. To not employ code names would require accurately predicting a system's eventual function. A project named artsy-admin starts to grate when we make the architectural decision to split apart management utilities or introduce more fine-grained administrative roles. An artwork-taxonomy label loses meaning when that system expands to include less structured tags

Branding shifts, products pivot, and companies merge. Project code names introduce a level of indirection between what engineers build and the labels, URLs, or brands that end users experience. Over a long enough period, these external or superficial changes will happen and risk introducing confusion or just subtle misalignment between form and function. As with software design in general, abstractions can be a powerful tool to separate concerns. Ask yourself: what code changes might be required if your company were to spin off your product or be merged into an acquirer?

Language is important, and not just for communication but for shaping our thoughts and assumptions. We frequently find ourselves debating which system should serve as the authority for a given domain model or where to implement a new feature, and project names that overlap with these topics (e.g., search, images, suggestions) would predispose us to certain decisions. Code names free us to focus on the architectural and organizational merits instead.

We like to have fun at work and it's more joyful to proclaim that "Torque is in the wild" than "data-sync has been deployed." Over time these names gain mythologies and personalities within the team and organization.

With this in mind, how should you choose a naming scheme?

Rules for a project naming scheme

These days, I've embraced Artsy's use of physics terms for project names. There continues to be some head-scratching as new engineers navigate codebases and encounter these terms or just struggle to identify the system responsible for a given site or feature. (This isn't shocking, since code names were probably adapted from more secretive environments like the military.) As your code names multiply and projects come and go, a glossary becomes essential. I suggest creating a simple document that maps projects' code names to descriptions, URL destinations, hosting environments, and teams.