Growth is tricky. Whether in terms of raw headcount or people’s evolving career stages. As a team you want to provide ways in which members can experiment with new ideas, and provide tools to help them offer new perspectives. One of our greatest tools for instituting change at Artsy is our RFC process.

We took this idea and applied to the process of making any cultural change in the company. Read on to find out why we needed it, how we refined it, some of the tooling we built around it, and what other options are available.

Why did we create an RFC process?

We created the RFC process in parallel with Peril being introduced at Artsy. Prior to Peril, most changes to culture were localised in different teams. However, once Peril gave us the ability to create cultural rules across all engineering repos in GitHub we also needed a way to let people know and provide feedback about these changes.

We started with the smallest possible implementation of an RFC and a notification service🔒. You would write an issue with this template:

This RFC came with a Peril rule that would post a notification into slack about an RFC being created:

Which meant everyone had the chance to know in-advance that a change was being discussed because it crossed team communication boundaries. Here’s the first RFC used at Artsy.

This was specifically built to be the minimum possible to get an idea of what we actually wanted from an RFC process for cultural changes.

How did it evolve?

Version 2 of our RFC process is what we’ve stuck with for the last 2 years. The second version expanded the scope from just making Peril changes to being comprehensive enough to cover most cultural changes we wanted.

This version also came with a recommendation on how to resolve the RFC, after a week you would add a comment and close the issue:

We’ve evolved the closing an RFC process since then: 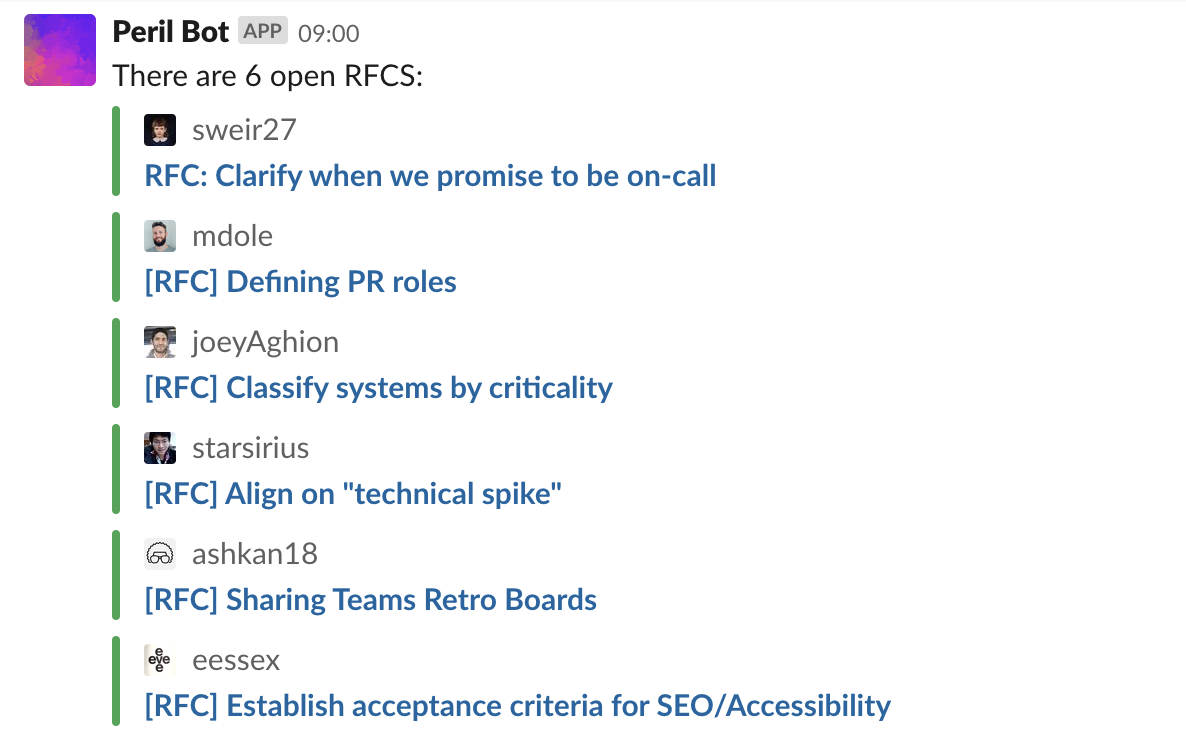 What are the alternatives?

This RFC process is not without it’s trade-offs.

An RFC is built with an action in mind, and it explicitly defaults towards this. This process purposely bakes in silence as positive indifference from observers. When being used as a consensus device, an RFC process really isn’t that great. It’s an asynchronous, flat conversation, which makes it hard to discuss all avenues with many simultaneous voices and can sometimes feel like whoever posts the most often kinda wins.

For consensus tools you really are better off with a meeting. There are all sorts of structured meetings which do a great job of finding agreement across many opinions.

For example, we wanted to try and get consensus on how to build APIs at Artsy. The RFC for that would probably have been something like “Move to use GraphQL in all new APIs”, which is a nuanced technical mandate that would require buy in from many people. While it does have an direct action, trying to feel like everyone agrees and will work this way in the future would have probably not worked out in a single-threaded long-form issue. Instead, we opted to use a town-hall style meeting, where people who had strong opinions would have time to present them - then at the end all developers would have the chance for feedback.

Where does it work best?

This RFC process is good for “I would like to improve this, does that make sense?” - and it’s a really great case of Minimum Viable Process where one issue can spark a great team discussion. Here’s some of my favourite ones from Artsy:

We sometimes have RFCs which we don’t want to discuss in public, for those we use our private version of README called potential. That said, our notification system works on any repo, so if it makes sense to have an RFC on a repo specifically, that’s no problem too.

You can see all of our current open RFCs on the Artsy org here, and I’ve opened comments for folks to talk below about whether they’ve enacted something similar - would love to see how this can be improved.