Engineering is an inherently long-term process. The Artsy engineering team has been around for 7 years, and that’s quite a lot of time to get things done. We use software that keeps track of changes over time thanks to source control, but tools like git only help keep track of small passages of time. I want to keep track of events that could take months to ship.

We’ve been doing a lot of long-term introspection as a team in 2018. Externally, this has been visible through things like opening our docs and creating our engineering principles. I’m expanding on this with an idea that I took from my work in building large open source projects: Highlight docs.

I’ve been the main contributor for Danger and Peril for about three years, working mostly solo, and it can be hard to feel like you’re actually getting things done. There’s an infinite backlog of people’s requests for improvements, and polite mentions of the flaws in your work. So, as a counter-balance it’s nice to take stock of events you’re proud of. I initially mocked this out as an issue in the peril repo but when I re-applied the idea to the whole of Artsy I used our existing open documentation repo artsy/README instead.

The core idea isn’t complicated, however it’s somewhat time-consuming and requires collaborators. I used the best method I know for getting a lot of people’s attention: spamming slack threads asking folks what were some of their highlights. I used these to fuel the main arcs of the doc.

A lot of the time, just starting something like this and putting some effort in up-front means others will start to participate. The trickiest part was finding the right definitive links for a particular event. Ideally we have open links (so people without private GitHub access (internally and externally) can enjoy them) but sometimes the right link is private and that’s ok. It’s not open source by diktat.

Trying to find the right balance between an “Artsy” event vs an “Engineering” event can sometimes be a bit vague, but I like to believe that more is more. It’s about pointing out important events, so more is always a net positive. With that in mind, here’s a few of ours, the rest is a click away: 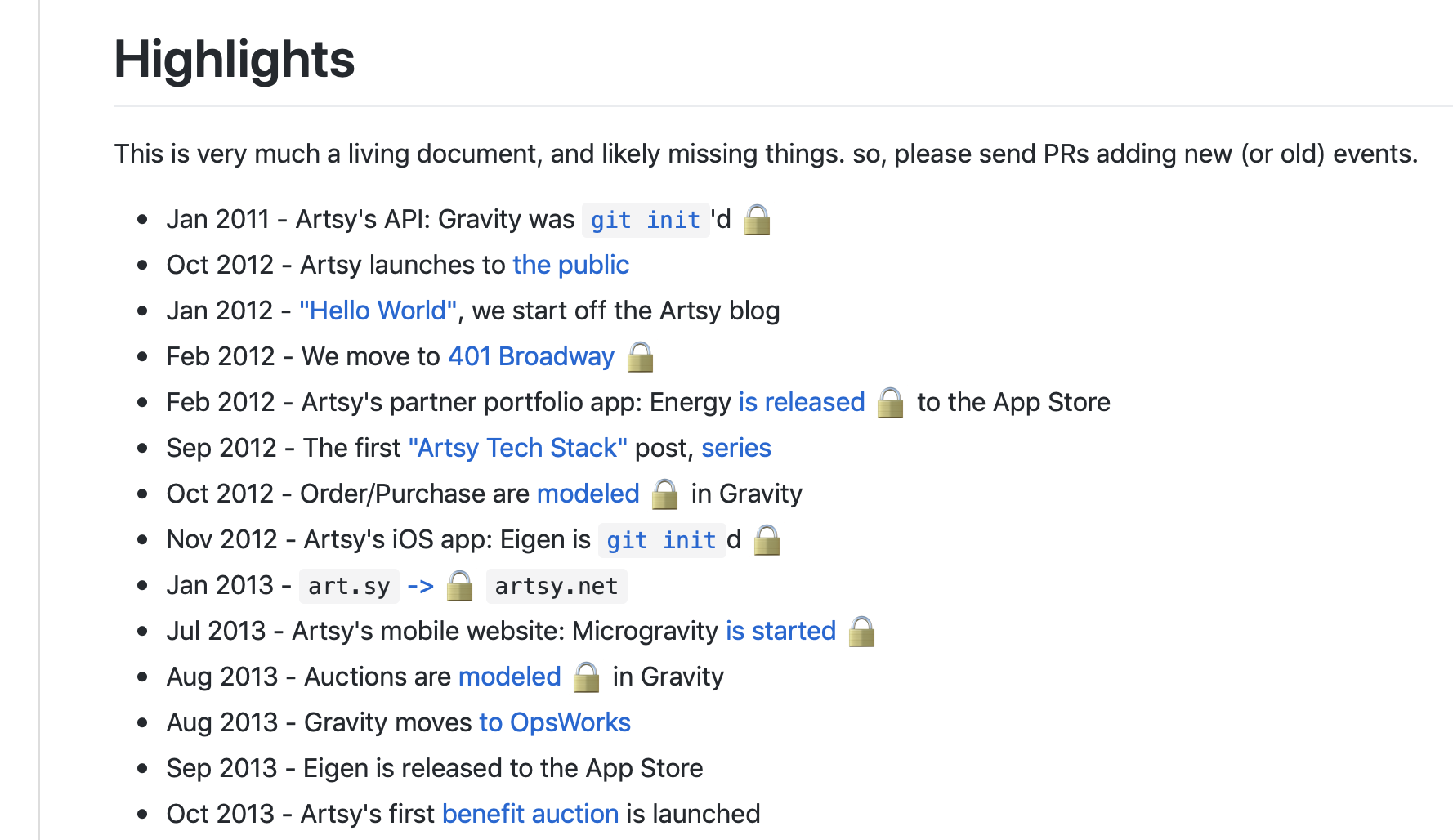 I think I’m going to make one of these with every new large scale project I work on, I kinda wish we had one for the Artsy iOS app now. Maybe I’m going to need to do that now. Ergh, this is what I get for writing blog posts.

I’d love to see some other companies or OSS projects using this idea - let me know in the comments if you are!