We’re at 9 months of serious usage of Peril in Artsy. However, I’ve been worried.

To get you up to speed on Peril, Peril is a tool that takes GitHub webhooks, and makes it easy to build one-off actions. It does this by having a per-account settings JSON, that connects JavaScript files to events from webhooks. So, for example, you can write a rule which runs when closing an issue in GitHub that looks for associated Jira tickets and resolves them. Peril provides no implicit actions like that, it instead offers a JavaScript runtime environment optimised to this domain so you can make actions to fit your needs. Like a collection of single-file probots.

Three months ago I started building out a “true” staging environment for Peril, one that allows any user or org on GitHub to click a button and have Peril running on their account. Pulling this off has two real interesting problems. Problem number one, security. Problem number two, my wallet.

Both of these issues stem from one simple problem: I need to run other people’s code on my machines and I think they should be able to store data. Which to be quite frank, is horrifying for a side-project. So, this post explores one of main aspects which I’ve architected Peril to make this problem tractable. Avoiding storing state in the form of data.

Let’s start with grounding how Peril works. The GitHub term for when someone adds Peril to their account is that it creates an “Installation” of the GitHub App. When a webhook from GitHub is sent to Peril, Peril grabs the installation metadata (env vars, settings repo addresses, cached config etc) out of a mongo database (yeah, I know, how early-2010s) and pulls out a set of rules. These rules are a map of Webhook events and actions to files. For example:

This custom JSON DSL maps opening an issue on GitHub to the evaluation of artsy/peril-settings@danger/new-rfc.ts. Peril runs the code which is declared as the default export with the JSON contents of the webhook. Then the file can execute with the DSL provided in both danger-js and peril’s extensions. Peril’s runtime is a reasonably normal nodejs environment, so it supports working with node_modules to get stuff done. Here’s what artsy/peril-settings@danger/new-rfc.ts looks like:

Implementation-wise, there is a single Peril API which recieves webhooks from GitHub. This triggers a “Runner” which is a hosted docker container (think, like, serverless) which hosts the runtime. The runner will then run the Dangerfile, triggering things like comments on PRs or any other interesting side-effect. 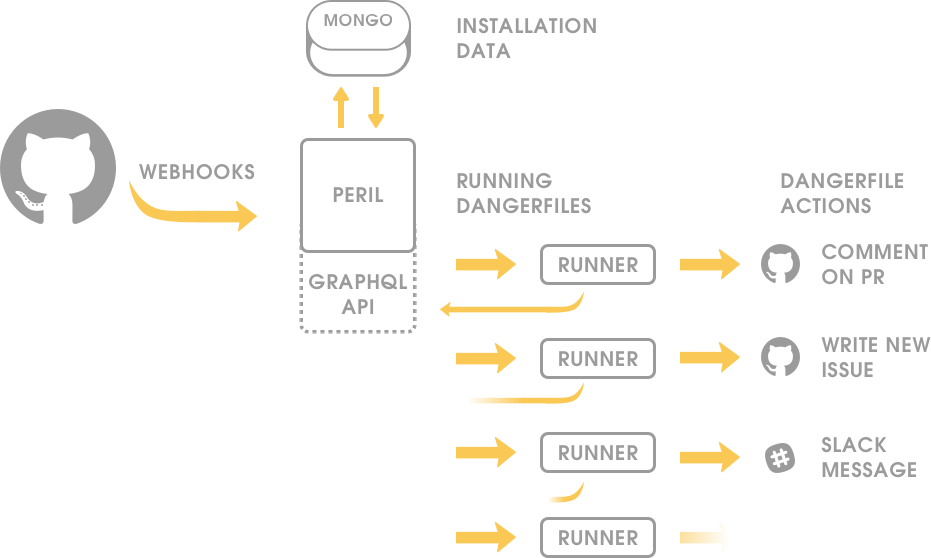 This is where things get tricky, I first explored running code inside a tightened virtual machine for node but eventually found enough holes that it was definitely not going to work against malicious user-code in the same process as Peril. I lucked out to a potential answer to this when building out documentation for danger-js, which could feed many birds with one bowl. I could separate out the execution context (think: the runtime DSL, the webhook JSON, and a bunch of installation specific config) as JSON and then pass that servers/processes then turn that back into a useful runtime again in a separate client which runs the Dangerfile (the name for a js/ts file running in the Peril JavaScript Environment. )

This idea was so compelling that I first used it to create a version of Danger that runs native to swift to figure out the kinks of what actually needs to be transmitted. For Peril, this meant I could explore having the evaluation of user-code inside a completely different server. I initially explored using AWS Lambda to run user-code, it’s cheap, fast and mature. However, it’s possible for lambda instances to communicate with each other, as each run is not a fresh process. Making it not a secure platform for un-trusted code.

Not deterred, I explored the world of docker hosting as a service - first exploring running my own cluster on AWS ECS and then settling on Hyper which offered sandboxed runs that booted in a few seconds. This is where my first real dive into obsessive statelessness comes in. The docker container, and the hyper environment contains no config by default. There is no Peril information available inside that runtime environment.

The information about a Peril run comes exclusively from Peril. In my head, I call this dependency injection for the runtime environment. You can get a sense for what the full JSON looks like in this fixtured file generated by tests. It contains everything from (temporary) GitHub access tokens (only for your installation), to environment variables for your run and the webhook JSON. The runtime environment only knows that information for the duration of the process then all access tokens expires after 30 seconds of it starting regardless.

With the runtime security figured out, and reasonably stable, I could start thinking about how people can understand what’s happening on their installations inside peril. 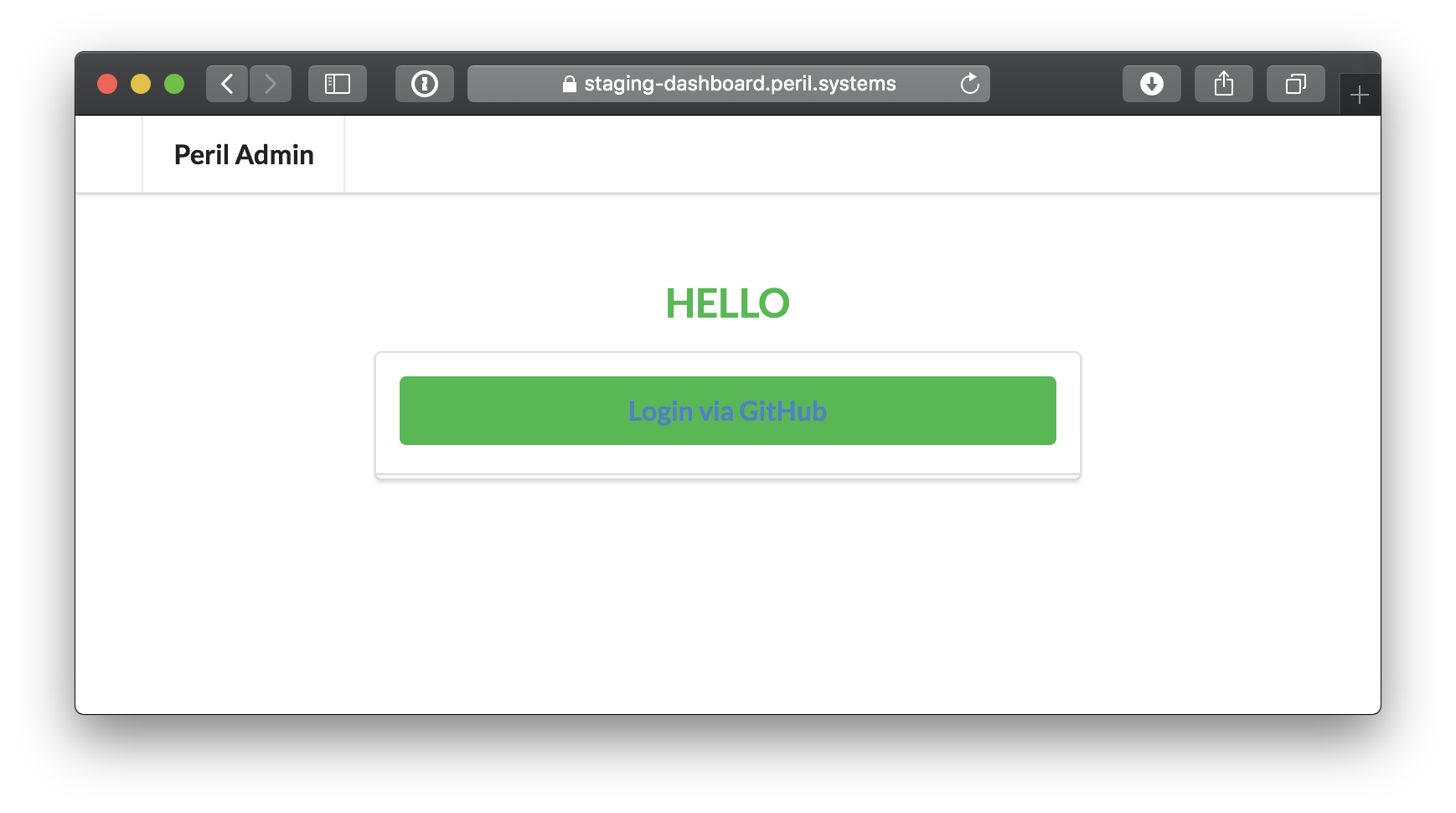 A JWT is a string made of three components, a header which says how it is signed, a base64 chunk of JSON data and a signature verifying the data. You can always read the data inside a JWT, but you need to know the public key used to sign the token to verify that it’s not been tampered with or created from another source.

This brings us to my first problem when building out multi-account Peril: User accounts. For Peril the root element of the domain model is a GitHub Installation. A first-glance perspective on building a web service like this would have me creating a user model which can keep track of permission to installations and unique user settings. With GDPR so freshly baked I really didn’t see any actual value in keeping this kind of data. Instead I added enough metadata to a JWT to replace a user model completely.

I opted to rely on GitHub’s Oauth API to verify what orgs a user has access to. This means GitHub hosts both the user model, and the permission relationships. This is always set up outside of Peril, and so there’s no need for duplication of the objects and connections inside this service.

You could throw it into jwt.io to look at what’s inside it, but I’ll do that for you:

So far, I think that’s enough information for the dashboard. You can let people know what account they’re logged into, and a show an avatar in a UI. The JWT is generated when you log in to Peril via GitHub OAuth, and Peril looks up what installations you have access to via the GitHub API. The connected installations IDs are stamped into the JWT in the iss section. This JWT is stored in the user’s browser via cookies, and the server never stores it.

In every API call from the front-end, the server validates that the JWT was signed by Peril, and has not expired. If it’s OK - the server trusts the data inside the JWT and you have access to administrate the installations. No stored sessions, no stored users.

There’s downsides to using a JWT like this. For example, what happens if the user is removed from the org? Until that JWT has expired (1 month), the user will continue have access to the installation. This is a trade-off which I’m OK to take right now. I think this post covers a lot of the downsides of this stateless JWT technique well. In the future, as Peril has access to org members being added or removed, I can build a way to expire the token at runtime.

The user/authentication JWT is not the only JWT in play in Peril.

I needed the ability for the JavaScript Runtime to send messages back to the Peril server. Peril re-uses JWTs for creating a short-lived (2 min) token. This token only has access to a single installation and is given a list of mutations it has allowlisted access to in the GraphQL API. This token is a part of the data injected in at the start of the process. The Peril JavaScript DSL uses this token under the hood when you run particular functions. This approach, the above post argues, is a perfect use-case for JWTs.

With an admin user interface set up, you can now get a good overview of what your installation looks like in Peril. 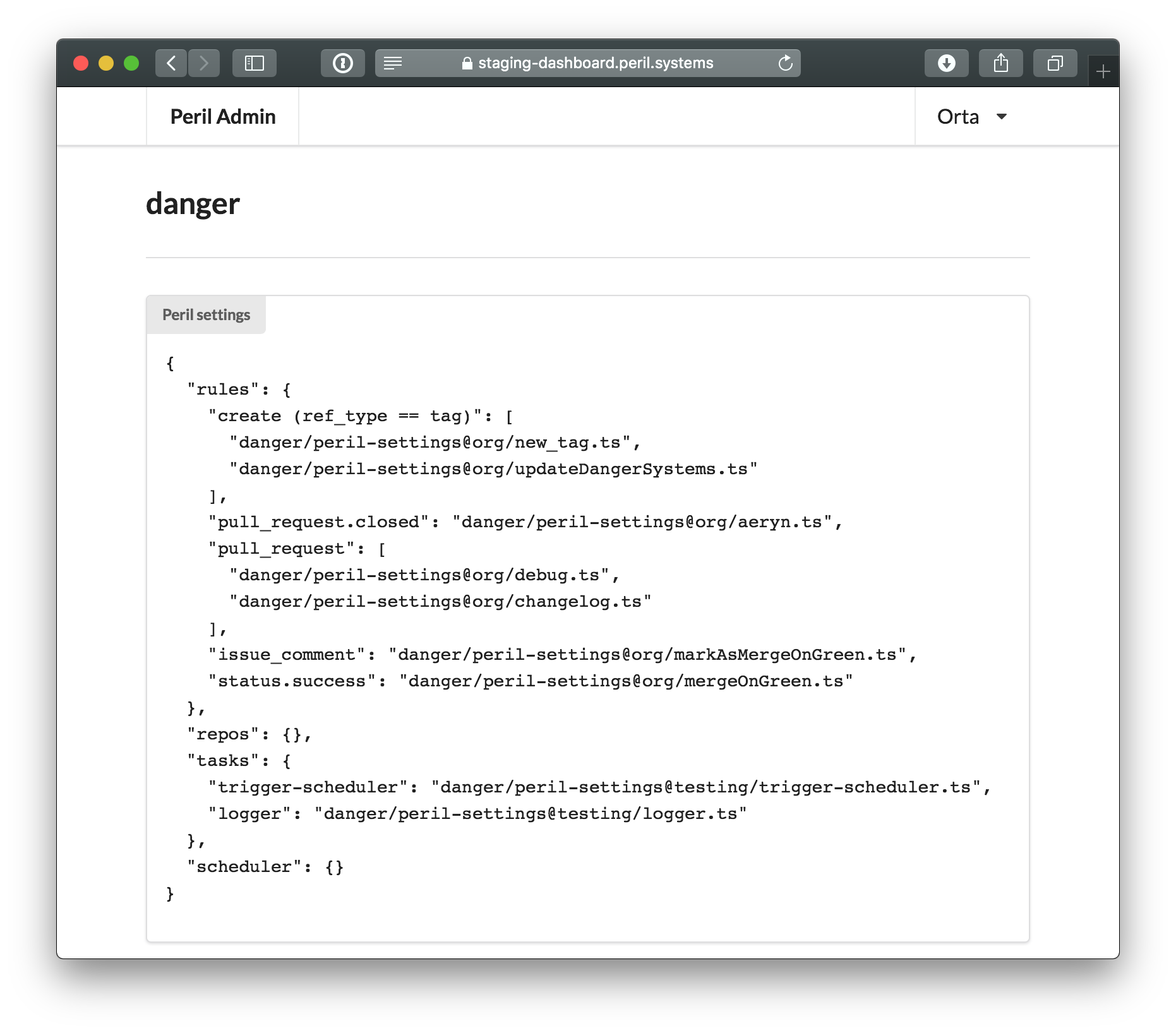 This is a good start, but it’s a static representation of a live system. In order to do any development of your Dangerfiles in Peril, you would need to keep triggering the same event inside the GitHub and seeing how Peril evaluates your code. Even with the rich type definitions, you’re unlikely to get it right first time.

And here’s where I made a compromise or two, in favour of a good abstraction. Ash recommended that perhaps storing webhooks from GitHub and making it feasible to re-send them in Peril would make a great development environment. I couldn’t think of a way to do that statelessly, so I opted to time-box them. Now you can trigger a 5 minute window on an installation where any event sent to Peril will be stored in mongo for a week. After that they’re gone.

This is a great trade-off on data storage vs value of a feature. It’s been the best idea so far on how to handle building a development mode into Peril, so I wouldn’t want to compromise the feature in favour of something that won’t store any data.

On the flip side, I spent a long time thinking about how I can get logs from a Peril run to a user without having to store those.

I came up with what feels like such an obvious answer in retrospect. When you open up the admin dashboard, it connects to Peril via a websocket. This websocket is used to send real-time updates about when an event is triggering a Dangerfile evaluation and its changing status. When the evaluation is finished, then the logs are collected and sent through the websocket to any users connected to the associated installation. The feature is particularly elegant because storing the logs for every Dangerfile run on something like S3 will not scale with my wallet. Plus, I don’t want to have access to your logs ideally. 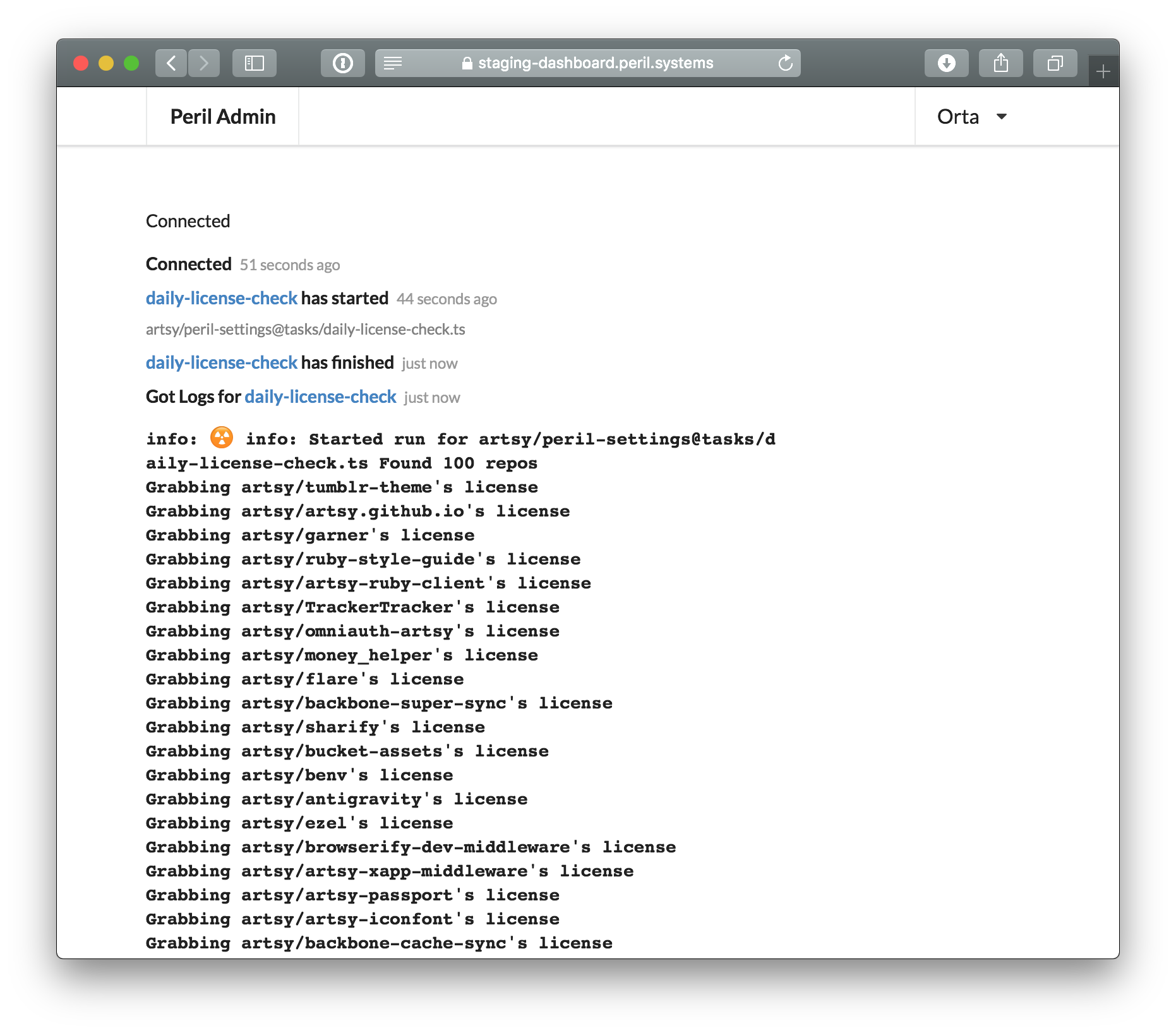 Again, an interesting trade-off. You can only get logs when you’re looking for them, as opposed to when a problem may actually have occurred. There’s things I can do to work around this if and when it becomes a pressing need, for example keeping an installation’s logs around for a day in Peril. Alternatives to this could be that Peril allows installations to define a webhook to receive the logs, or for Peril to pass them directly to a installation’s Papertrail (or other hosted log services).

A lot of the obsession comes from a reasonable enough desire to ship something that people can trust, that could start off small and hard enough that it doesn’t consume all my spare time with support and fixing fires. With a lot of these ideas in tow, I’ve been able to feel pretty confident in letting others access staging environments and use my hosted version of Peril. Which means I can move on to the next items in my TODO list, making the dashboard make sense and to start thinking about what the public facing product pages look like for Peril.

Editor’s Note: This post has been updated as part of an effort to adopt more inclusive language across Artsy’s GitHub repositories and editorial content (RFC).