tl;dr You can try Artsy on your Amazon Echo now, say “Alexa, enable Artsy” or see alexa.artsy.net for more info.

With its powerful automatic speech recognizer, accurate natural language understanding and outstanding text-to-speech capabilities, the Amazon Echo, nicknamed “Alexa”, always impressed me. While not the first in its category and introduced in late 2014, Alexa was the first consumer device in my home to truly enable the conversation between human and machine. It was stationary, always listening for a wake word, and clearly outperformed all previous attempts when it came to the ability to receive commands from the other side of the apartment.

Alexa knows about the weather, but it doesn’t know much about art.

In this post I’ll dig a little inside the Alexa software platform and go over the technical details of bringing Artsy to the Echo, starting with a very simple “Ask Artsy about Norman Rockwell.”

Find the Artsy skill in the Alexa app and the complete Skill code on Github. And if you just want to learn to write a skill quickly, watch @dblock live-code a skill in this video.

How does Alexa work?

Alexa is the software platform used by Alexa-enabled devices such as the Amazon Echo or the Echo Dot. I used a $49.- Dot with headphones for most testing, and I have a bigger Echo at home (the main difference is the quality of the speaker). Because even a smaller Dot was sufficiently annoying to my coworkers, I wish it were battery powered, so I wouldn’t need to unplug it to go run tests in a conference room.

Alexa waits for a wake word, either “Alexa” or “Amazon”. It’s always on and has a built-in speech recognizer for the wake word only. After it hears the wake word, a blue light ring turns on and the device starts transmitting the user’s voice, called an utterance to the Alexa platform in the cloud. The light ring is the indicator of it “listening”. The cloud service will translate speech to text and run it through a natural language system to identify an intent, such as “ask Artsy about”. The intent is sent to a skill, which is a piece of software living in the cloud that can generate a directive to “speak” along with markup in SSML format, transformed into voice and finally sent in wave format back to the device to be played back to the user.

You need an Amazon Apps and Services Developer account and access to AWS Lambda. I’ve implemented the Artsy skill in node.js using alexa-app. You can find the complete Skill code on Github.

To get Alexa to listen, you must design an intent. Each intent is identified by a name and a set of slots. This is an order of magnitude more limited than what the Alexa system is capable of doing out of the box. It means that the platform will not transcribe any text for your application, chatbot-style. The intents have to be simple and clear and use English language words or predefined vocabularies. Furthermore, Alexa has a lot of trouble with names as it constantly attempts to recognize them as dictionary words and no support for “wildcards”.

I started implementing a fairly complicated “when is an artist born” intent, which turned to be too ambitious for Alexa to understand and ended up with a much simpler “ask artsy about an artist”. I called this “AboutIntent”, which takes an artist name as input (or slot).

The only possible sample utterance of this intent is “about {VALUE}”, the “ask Artsy” portion is implied.

Since Alexa cannot understand artist names out of the box, I had to teach it with a custom, user-defined slot type added to the “Skill Interaction Model” with about a thousand most popular artist names on Artsy. 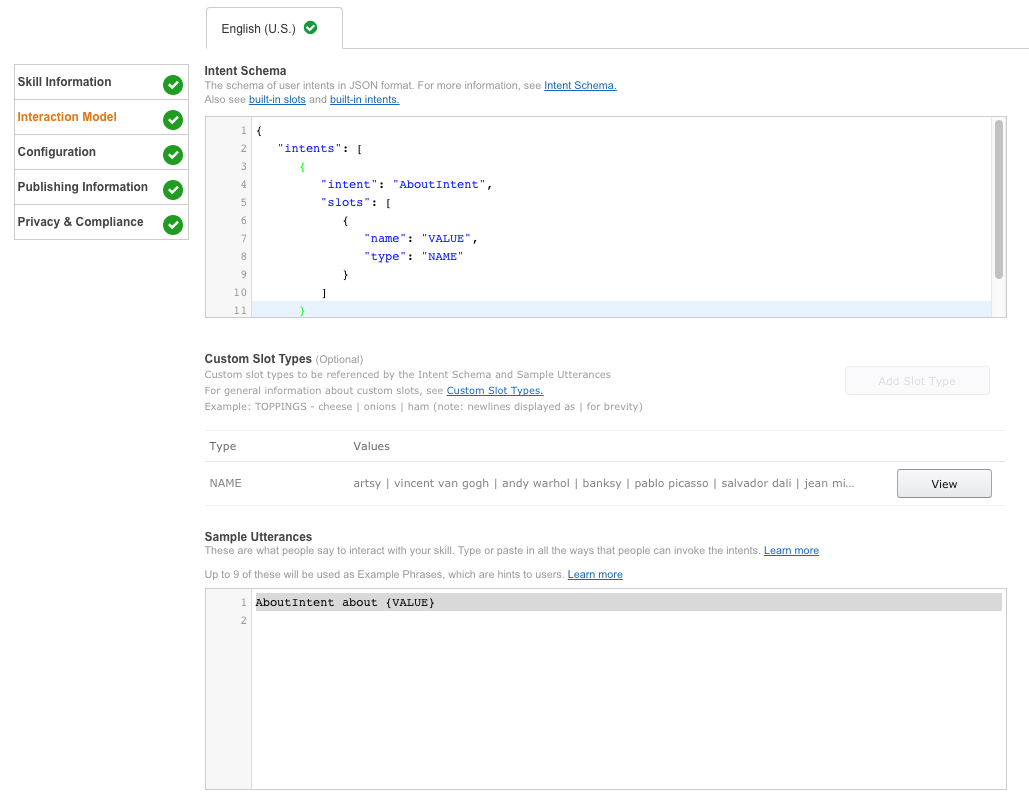 Intents are the API of a skill, otherwise known as an Alexa app. Using alexa-app makes implementing intents easy.

The skill expects a slot value as defined in the intent above.

We use the Artsy API to implement the actual skill. There’s not much more to it.

I found it convenient to host the skill inside an alexa-app-server in development. It automatically loads skills from subdirectories with the following directory structure.

Note that the server exports the Express.js server for testing.

The skill is mounted standalone in AWS lambda, under alexa-app-sever in development and otherwise will export schema and utterances. It decides what to do based on process.env['ENV'], loaded from a “.env” file. The committed version of this file sets the value to “development”.

The server loads .env from server.js.

Finally, the skill can do different things in different environments.

Running the server locally with node server.js will create a simulator console on http://localhost:8080/alexa/artsy. 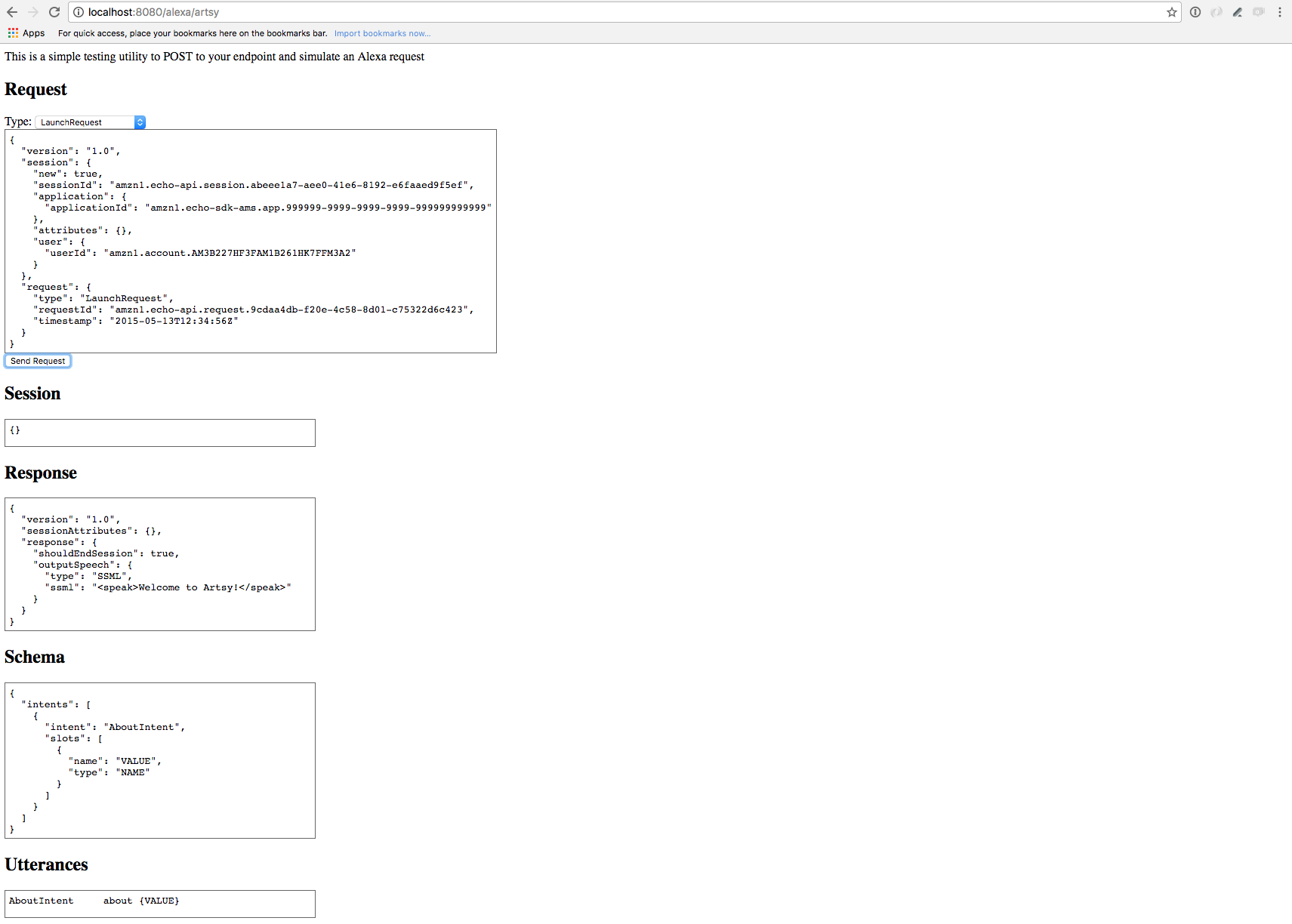 We will use the test console to produce test JSON. The about intent translates into the following.

The production version of the Alexa skill is a Lambda function.

I created an “alexa-artsy” function with a new IAM role, “alexa-artsy” in AWS Lambda and copy-pasted the role URN into “project.json”. This is a file used by Apex, a Lambda deployment tool (curl https://raw.githubusercontent.com/apex/apex/master/install.sh | sh) along with awscli (brew install awscli). I had to configure access to AWS the first time, too (aws configure). 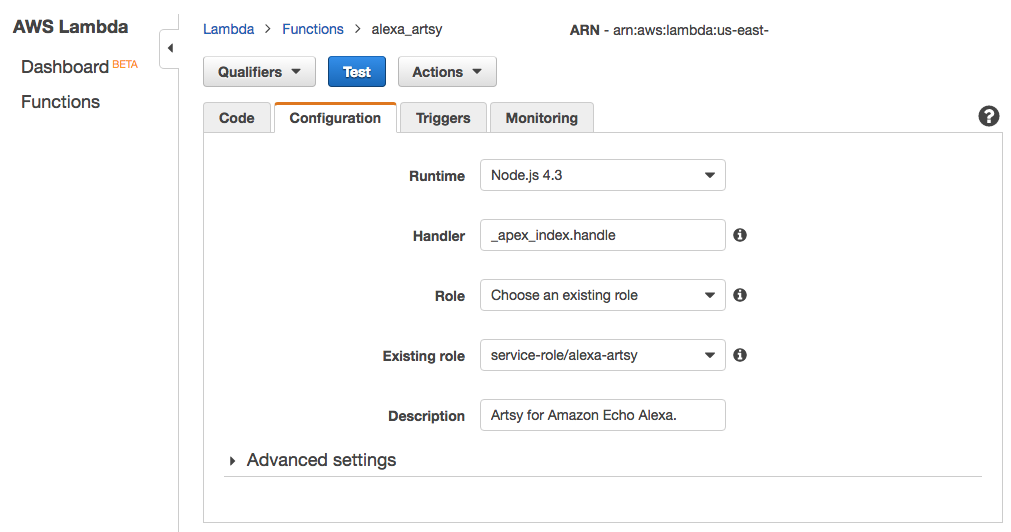 In order to connect the lambda function with an Alexa skill, I added an “Alexa Skills Kit” trigger. Without this you get an obscure “Please make sure that Alexa Skills Kit is selected for the event source type of arn:…” error.

I configured the “Service Endpoint” in the Alexa Skill configuration to point to my Lambda function. 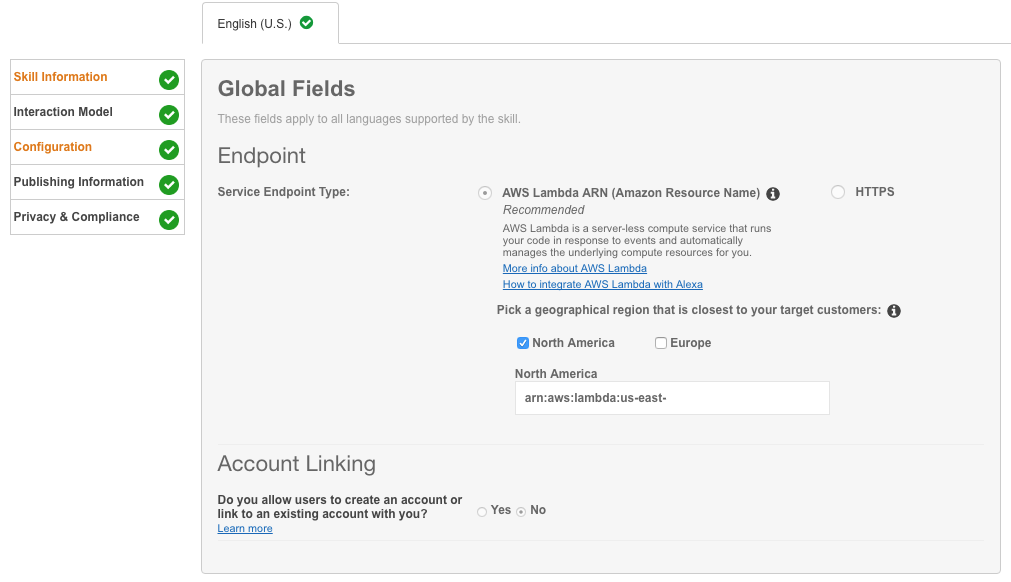 I deployed the lambda function with apex deploy and test the skill with apex invoke or from the Alexa test UI.

Each time we do a apex deploy it will create a new version of our function and will update $LATEST Lambda alias. One way to handle versioning is to create a $PROD Lambda alias and point to $PROD when setting function in “Service Endpoint” step and each time we want to upate prod we need to update $PROD alias to point to latest version.

Also note that after each deploy with apex we need to set environment variables for the newly created version.

Logs didn’t appear in AWS Cloudwatch with the execution policy created by default, I had to give the IAM “alexa-artsy” role more access to “arn:aws:logs:::*” via an additional inline policy.

You can use echosim.io to test your skill. It’s essentially identical to an Echo.

I got an Echo Dot. Test skills appear automatically in the Alexa configuration attached to my account!

I just try to talk to it.

This took several weeks of back-and-forth. I should have gone through the Alexa Skills Kit Voice Interface and User Experience Testing for Custom Skills more thoroughly, but even after reading it a few times it wasn’t obvious what the reviewers wanted.

The sample utterances are in the Interaction Model section and must not include the wake word or any relevant launch phrasing. In the Artsy app I only have a single utterance with “AboutIntent about {VALUE}”, but lots of entries for VALUE in the custom slot type. I forgot to include artsy and Norman Rockwell in those.

The skill got rejected mutliple times with about artsy not working, so I eventually gave up on supporting that. Alexa would recognize it as artsee, artzi and many other variations. I suspect testers pronounce it artsay or artsai and never get the correct response.

The welcome prompt is required, and must describe what users can ask of the skill and the session must remain open for a user response. This means that in order to get your app certified you must build some kind of basic conversational ability. My first cut simply said “Welcome to Artsy”, which wasn’t good enough. I added a prompt, “Ask me about an artist.” and included shouldEndSession(false) in the code.

The skill must exit appropriately when users say “stop” or “cancel”. This means you must build at the very least an AMAZON.StopIntent, AMAZON.CancelIntent. In my first iteration a user would say “Alexa open Artsy”, then “stop” and would get “Sorry, I didn’t get that artist name.”.

The skill must also implement AMAZON.HelpIntent as a question. In my first iteration a user would say “Alexa open Artsy”, then “help” and would get “Sorry, I didn’t get that artist name.”. Then help would say something like “You can ask me about Artsy. Say cancel or stop at any time.” The certification process requires a prompt, eg. “What artist would you like to hear about?” and the session must remain open via shouldEndSession(false).

Find the Artsy skill in the Alexa app.